Blog: Running Through My Mind
I am in denial (and for once it isn’t about my age).
Previous
Next

I 'may' have signed up for a marathon

I am in denial (and for once it isn’t about my age).

I think I have mentioned before that I am into running (once or twice I hear you say whilst rolling your eyes).

When I first got into running, I recall a distance of 3km seemed like a tall order and a marathon was the most ridiculous thing to want to do. I, like many of my non-runner friends, shared the view that marathons are bad for you and anyone who wants to run one is certifiable. The body is not meant to do that sort of distance; think of the strain on your body; think of your knees; think of the weeks of training (yes, we underestimated it) and,*gasp* the not drinking alcohol or eating junk food!

Then I discovered parkrun and 5km became not only achievable, but a distance over which I could maintain my fastest race-pace. I won’t say ‘comfortably maintain’, because that would be a lie – there is nothing comfortable about running flat-out over any distance (anyone who says there is may be made of wood and have a long nose).

Nonetheless, I got bitten by the parkrun bug.

I wanted to run faster. I wanted to get fitter. I wanted to catch up with the lady in the distance with the brunette ponytail and not to be beaten hands down by her week after week. In short: I discovered a competitive streak I never knew I had.

I read somewhere that long, slow runs are great for increasing stamina and can actually help with improving pace. Next thing I knew, I was running 10km on a regular basis and my 5km parkrun time was coming down steadily. I still believed a marathon was a bad idea, something ‘other people’ did and this I asserted over coffee after the parkrun just last month.

Then I found myself at the inaugural Brighton 10km race as part of Brighton Marathon weekend 2014. I enjoyed the whole experience and got a 10km personal best of 52 minutes 44 seconds. I then spent the next four hours shivering in Brighton waiting for the park and ride to start up again after the marathon, but feeling a warm glow of satisfaction from my achievement.

Watching all the marathon survivors crawl up the aisle of the bus, weeping at the realisation all the seats on the lower deck were already taken and they would have to try to climb the stairs, wearing their shiny medals and even shinier space-capes with pride, drinking free Gatorade as though it would miraculously cure all their ailments in one sugary, chemically-fruity tasting slurp, I realised something: I was actually jealous of them.

I wanted that huge sense of achievement for myself; even if it came with blisters the size of flying saucers. I wanted that feeling of pride; even if it made the steps on a bus look like a mountain to climb. Heck, stairs are over-rated anyway - I live in a bungalow.

I found myself telling people I had ‘only’ run the 10km race and stuffed my medal inside my coat to avoid people congratulating me (most marathoners had totally forgotten there was a race before theirs, so it didn’t even occur to them I hadn’t just run 26.2 miles too). As one man said when I made my apologetic confession, “I thought you looked a bit fresh”.

Please don’t think I am belittling running 10km, or any distance for that matter. I still feel great pride in my achievement. It just felt like I had turned up to the party in the wrong clothes.

So, I drove back from the park and ride feeling a mixture of emotions, but decided to put it out of my head. After all, only idiots run marathons. Right?

Next thing I knew I had run 14km and I felt good. A dangerous thought crept into my mind; a half marathon is 21km, that’s only half the distance again and, most likely, on nice flat roads, not part-chalk, part-grass, part-sheep droppings. How hard would that be? The serendipity of a friend posting a link to the Bexhill Poppy Half Marathon in November, a lovely, flat course near the coast of Sussex and 20 minutes from my home, put the idea firmly in my head.

Now, I hesitated to commit to the half marathon at first – I had never really considered running one before. But, I thought, it’s ‘only’ half a marathon and that only makes me halfway to being an idiot in my friends’ eyes, surely? No. Wait. Wouldn’t that make me a half-wit? Oh, never mind.

So I told myself signing up for a half marathon isn’t so bad. At least I hadn’t been crazy enough to get carried away with the atmosphere of the post Brighton marathon bus ride and sign up for a full marathon.

That was when I made my next BIG mistake. Twitter.

I like Twitter. I like reading about what people have had to eat, what kind of a day they have had, what Snoopy and that weird yellow bird have to say for themselves today and I enjoy joining in with the running community conversation for #ukrunchat hour twice a week. With hindsight, I should have given the last one a swerve for at least a week following Brighton Marathon and London Marathon, but I didn’t (I am a half-wit, after all). Instead, I was bombarded with tweets about how well people had done, how amazing (and in some cases, simultaneously atrocious) they felt after completing a marathon and how we should all sign up for the next marathon together, like one big running club. The peer pressure was tremendous, particularly for someone already resisting crazy notions about a marathon being ‘just’ double a half, which, after all, is ‘just’ half again what I am already doing on the trails.

This leads me to now: I ‘may’ have ‘accidentally’ and in a moment of weakness during mass Twitter post-marathon hysteria, have signed up for Brighton Marathon 2015.

It’s not real yet. It’s a whole year away. I have two 10km races and a half marathon to tackle first. I am in denial.

Besides, once I tell them, it becomes real. I have to do it.

…Of course I am going to do it.

(P.S. If any of my friends are reading this, it’s pure fiction, don’t believe everything you read. What? Me, signed up for a marathon? Do I look like an idiot?) 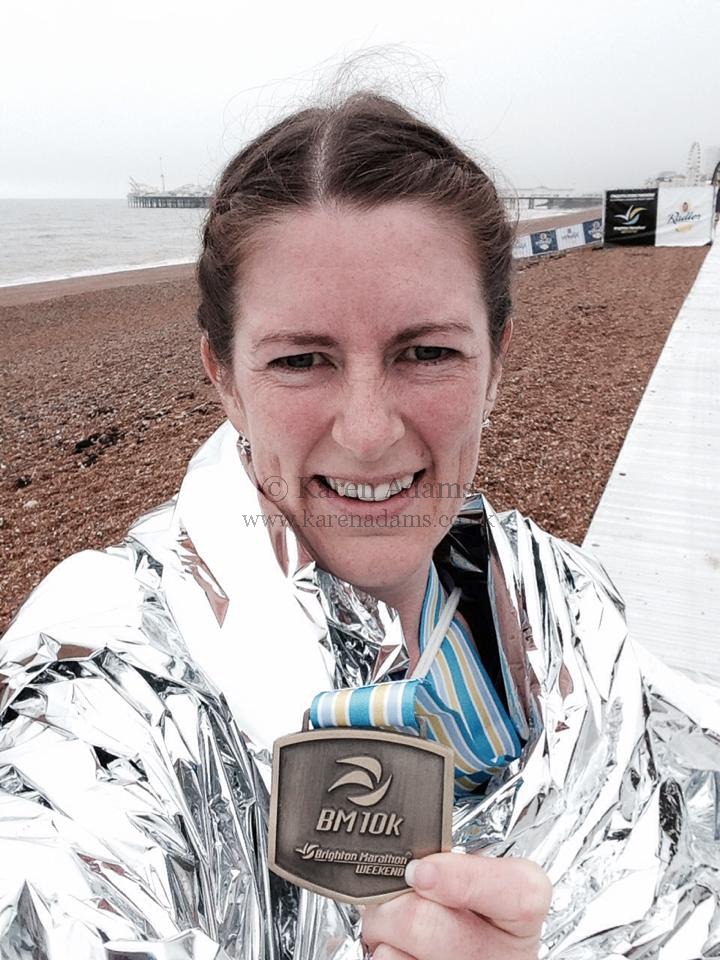