Blog: Running Through My Mind
I have always been a strong believer in mind over matter and I have found that running has shown me even more clearly just how true this is.
Previous
Next

13/06/2014
I have always been a strong believer in mind over matter and I have found that running has shown me even more clearly just how true this is.

I blogged recently about the internal debate I had at about 2.5km into a 5km parkrun. This started with me telling myself I couldn’t possibly keep up my current pace, continued with me asking myself why, exactly, was that the case and ended with me giving myself a metaphorical and mental kick up the backside and running a personal best time.

This is just a fairly minor example of the power of mind over matter: think of all those people completing marathons and ultra-marathons and then tell me that they could have done that without the right mental attitude.

Mind over matter isn’t just about forcing yourself to do something you might otherwise not want to do, it’s so much more than that:

With the right mental attitude in life, I believe you can achieve anything you want; within reason.

But what does ‘within reason’ mean, I hear you ask? How do I decide whether something is reasonable? Well, I guess that is up to you to decide and I won’t try to define it, as it is very personal and probably different for each individual reading this. What one person feels to be perfectly reasonable, another may feel is shooting for the stars and another may think is aiming way too low.

The key point is this; until you believe it is reasonable, you are unlikely to achieve it: Mind over matter.

Take me, for example; I believe it is perfectly reasonable to simply decide not to get colds and flu any more. They are a waste of time and they stop me from doing stuff I enjoy, like running. Some people may believe that is a crazy idea and totally unreasonable, and that’s fine. For them, not for me. I hope they enjoy their duvet days.

I, on the other hand, have made it through numerous cold and flu epidemics at work and one severe sickness bug without so much as a sniffle or stomach cramp in the last year. I have sat in my office (aka shed ) with my two colleagues sneezing into tissues, coughing and spluttering onto their keyboards and telephones, making me what I can only imagine must be germ-infected cups of tea (no way am I turning tea down if I haven’t had to make it myself) and with the doors and windows shut and the oil fired heater cranked up to heat setting ‘mouth of an active volcano’, all without catching anything. Why didn’t I catch anything? Mind over matter. What other explanation could there be?

Maybe it is a form of self-hypnosis. I don’t know. I just know that, for me, it works.

I just wish I had decided not to have hay fever this year before the pollen counts rose … sniffle, sniffle, wheeze…

So yesterday, I stopped taking the anti-histamines and today I feel much better. By tomorrow, I have decided, I will no longer have hay-fever…. 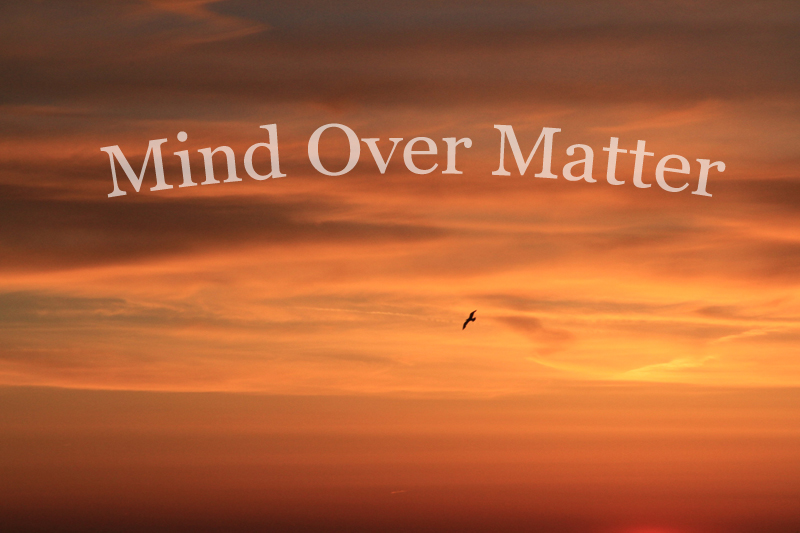