Blog: Running Through My Mind
I love trail running and can often be found (or lost, in some cases) up on the South Downs somewhere near Eastbourne. I was therefore very excited when I saw that Brighton Sports organise the Brighton Trailblazer; a 6 mile (or thereabouts) trail run across the South Downs in Woodingdean, Brighton.
Previous
Next

31/07/2014
I love trail running and can often be found (or lost, in some cases) up on the South Downs somewhere near Eastbourne. I was therefore very excited when I saw that Brighton Sports organise the Brighton Trailblazer; a 6 mile (or thereabouts) trail run across the South Downs in Woodingdean, Brighton.

So I checked out the information online, which confirmed a very reasonable entry fee, gave a map of the route, information on the easy on-road parking, general advice on keeping hydrated on the day and told me that it was an undulating course with the only hill of note being the gradual incline of Snake Hill as you make your way to the finish. It also told me I get free sports drink and cake at the finish.

Confident that all my running up and down Butts Brow in Willingdon would stand me in good stead for some "undulations", I signed up.

On receipt of the email confirming my entry, I was pleasantly surprised to find out there was also a medal on completion of the race. Having seen no mention of a medal on the website, I believed there wasn't one. Although this hadn't stopped me signing up (I was in it for the cake), I dropped a quick email back to the organiser, Mark, suggesting this could be worth advertising. I pointed out that many of my running buddies' first question about any race is usually about the "race bling", i.e. medal. I received a nice reply from Mark that this hadn't occurred to him (I guess maybe he is in it for the cake too?) and he updated the site.

Sunday 27th July 2014 soon came around and I found myself making my way to Woodingdean on a hot and humid morning, a little bit later than I intended and fretting about safety pins - as you pick up your race number on registration, I hadn't even thought about bringing any safety pins until I was halfway there, by which time it was too late.

I arrived in Woodingdean, hoping it would be easy to find and it was - lots of brightly coloured, technical wear was in view as I came over the hill and I could see dozens of cars parked along the road on the left. This was good as it helped me find the road I needed, but not so good as most of the spaces near the start were taken and I kept driving for what felt like an age to find the first available space. It actually wasn't that far from the start, but when you are in a hurry and mindful of the time ticking away, these things tend to exaggerate themselves....

I registered and picked up my race number and, thankfully, four safety pins provided by the organisers, with just 5 minutes before the registration was due to close. With only enough time for a few stretches (thank goodness I did 25 minutes of yoga before I left the house), we all filed to the start line and, after a few last minute instructions, we were off.

The race started with a slight incline, followed by a level stretch with amazing, far-reaching views over the South Downs, and another uphill stretch. I felt my pace was good and I had started in the right position, with not too many runners overtaking me (except the guy in the tutu - there is always one!). I focused on keeping up with the two ladies running just ahead of me, one of whom had a Hants (or Hunts, I can't remember) AC technical t-shirt on.

As we ran along, I noticed I could see the fast runners, in the distance, as they turned the bend and headed off to my right. Little dots in the distance. I had a moment to worry about coming last and decided that when I reached the bend, I would look back to check how many runners were behind me.

We started passing walkers as I took the right bend and I noticed they, too, were wearing race numbers. It was nice to whizz by them - at least I was overtaking somebody, Miss Hants AC and her friend having started to put a bit more distance between them and I.

I looked over my shoulder and, to my dismay, couldn't see anyone on the part of the route I had been on a few minutes earlier. Again, I had that moment of self-doubt: If they are all on this stretch already, will they all overtake me before I reach the finish?

I pressed on and a minute or so later was rewarded with my favourite part of trail running: the steep, rocky, downhill track! Whooping and waving my arms about as a counterbalance, I made my headlong descent with total abandon. If there is ever a time I regain that childlike feeling of pure joy, it is when I am battling gravity and gravel, careering down a hill at breakneck speed! I passed Miss Hants AC and her friend, who wisely let me by as they made a more sedate, sensible descent. Ironically, it was on the level path through the cornfield where I nearly turned my ankle, but fortunately I caught myself just in time.

I passed through the field with the cows without any drama and noticed I was now keeping pace, albeit at a distance, with a male and female runner dressed all in black. These were very useful to me, as I spotted them at approximately the same distance ahead of me regularly over the next few miles and this ensured I stayed on the correct route.

Shortly before a right turn up a hill, blissfully under the partial shade of some sparse tree-cover, I noticed a checkpoint for the trail walkers and some people nearby dressed in army uniforms. It was only later that I realised these must have been the Gurkha Trail Walkers - I had known in advance they were walking the 100km of the South Downs Way, but in the heat and concentration of placing one foot in front of the other, it hadn't clicked.

So I made my way up the slightly shady hill, wondering whether this were Snake Hill, then realising that was wishful thinking when my running app informed me of how many kilometres I had covered (not enough for this to be the final incline).

A few more twists and turns ensued, with no signs of the ladies overtaking me, although I had caught a glimpse of them behind me, and the pair dressed in black were still ahead. Thank goodness for them when I reached a corner of a field at about 6km and spotted them off to the right climbing a hill (what I later realised was the real start of Snake Hill) - without them I may have missed the arrow marker and run straight on.

And so Snake Hill began. The gradual incline towards the finish; what I had failed to realise from the map sent out was that it was a gradual incline for approximately 3km-4km. Every time I thought I could see the pair in black cresting the hill, it turned out to just be a bend before the hill continued up on its apparently never-ending ascent. I realised then that the name of this hill was actually very apt.

I was beginning to tire a bit at this point, with the sun beating down on me and no respite from the uphill climb, but I was determined to keep running. I reminded myself of what a sense of achievement I would feel when I made it all the way up without stopping or walking. This was not easy when a man overtook me, only then to alternate between walking and running, just ahead of me, for the next half a kilometre or so. I was annoyed that his walk appeared to be faster than my run, but I think this was just an illusion as I did, finally, in the last few metres of the hill, overtake him.

I reached the final marshals at the top of the hill and was directed to turn right. This was a beautifully level, manicured piece of grass in a straight line to the finish and I started to break into a sprint.... when Miss Hants AC came speeding past me. "Let her have it", I thought (as though I had any choice). I was just pleased to have kept ahead of her for so long and there was no sign of her friend, so at least I beat one of them.

The timekeepers and position recorder cheered me in, with encouragement to push the last bit, and I finished with a smile in 58 minutes and 45 seconds.

The promised cake was waiting for me at the registration stand, after I collected my medal and drank a few gallons of water and Gatorade, and I managed to consume a few chocolate brownies and choc chip cookies.

I noticed some runners were getting their finish positions and times, so went over and asked for mine. A clipboard was consulted and I was informed I finished a not too shabby 72nd overall, and the 21st female out of 46. So it turns out my fears of being last were completely unfounded.

I met Mark the organiser afterward and I did comment that he had misled me about the 'undulating' course and the 'gradual incline'to the finish, but I had to admit I enjoyed every minute of it.

Once it was over, of course.

But as every runner knows, pain is temporary and soon forgotten, discomfort is a nuisance but not a pain and everything is right with the world once you have your race bling.
And cake. 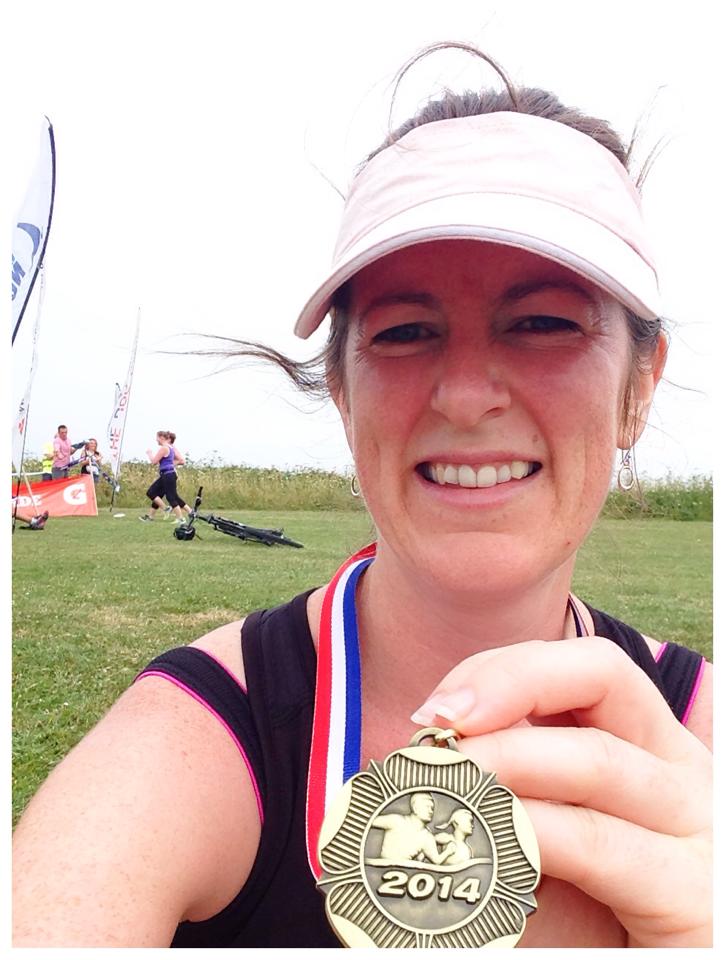 Looking a bit hot and windswept, high on fudge brownie and adrenaline!
Next
Previous