Blog: Running Through My Mind
As I have mentioned in previous blogs, I signed up for Brighton Marathon in April 2015 after running the 10km race at the event in 2014. At this point in time, 10km was pretty much the furthest distance I had run and certainly the furthest I had raced. It was, in fact, my first ever race of any distance (discounting parkruns, of course, as these are timed runs, not races).
Previous
Next

11/11/2014
As I have mentioned in previous blogs, I signed up for Brighton Marathon in April 2015 after running the 10km race at the event in 2014. At this point in time, 10km was pretty much the furthest distance I had run and certainly the furthest I had raced. It was, in fact, my first ever race of any distance (discounting parkruns, of course, as these are timed runs, not races).

It was too early to start marathon training, but I didn’t want to suddenly find myself with just a few weeks or months to go before the marathon and no training under my belt. It therefore made sense to sign up for a half marathon around November 2014 to give me a training target, which would then lead nicely into the marathon training in December.

So I have spent the last 12 weeks training for my first half marathon, which culminated in me running the Poppy Half in Bexhill on Sea on Saturday 8th November 2014.

I followed the plan carefully and all went well, with the longest run of 19km two weeks before and a race-pace 10km one week before the race.

My original, official target was to run the half in less than 2 hours 15 minutes, but as my training progressed I had started to hope secretly for a sub-2 hour finish.

All that was left was a sports massage on Tuesday and a last, gentle 40 minute run Thursday evening.

I think you are probably already ahead of me here. You guessed it: Thursday’s run resulted in a brand new knee pain, which persisted the whole of the next day, the day before race day. This, combined with an appalling weather forecast, left me wondering what on earth had I let myself in for! I was also beginning to think that my sub-2 hour target was more of a wish than an achievable target.

Fortunately, race day dawned and the knee appeared to have righted itself (thanks possibly to the liberal application of an ice pack, physio cream and some yoga moves a contortionist would be proud of!). It was windy outside, but the forecasted rain appeared to holding off, so I decided to just make the best of it – after all, you can’t control the weather, but you can choose your attitude.

The race was a 12.30pm start, so I found myself going through the usual pre-race preparations at a leisurely pace: deciding what to wear, getting my gear together, filling the water bottles with electrolyte, braiding my hair, making peanut butter flapjack ….

Ok, so maybe the last one isn’t that usual, but I had time and it is a great pre- and post-race snack.

Typically, I then found myself running late (3 hours to get ready and I still run late!), but as promised, there was plenty of parking along Bexhill seafront and I reached the registration desk with plenty of time to spare, despite bumping into a number of people I knew from parkrun or recognised from Twitter on the way to it. I registered – race number 4 – and received my timing chip, which I was advised to wear around my ankle.

So feeling simultaneously like an elite runner and a criminal wearing an electronic tag (my number 4, I later found out, was simply a case of entries being alphabetical), I ventured to the start line on the seafront, with severe misgivings about my choice of apparel (shorts and a t-shirt) in 27 miles per hour winds and sea spray from the crashing waves.

I briefly had a chance to meet the lovely @digdeepdolly, @FitBits_ and @ChrisAgnew3 before warming up.

After a 2 minute silence in honour of the war veterans, the race was started and off I went, determined to stick to my pacing plan and not get carried away with a too-fast start.

The course was a 3 lap course, going out along the promenade before coming up a small hill, past some nice houses, up and back down a residential street, before re-joining the seafront.

When I first realised the race would be 3 laps, including an element of out and back, I was a little disappointed, as I believed that would be mentally tough to do. I generally prefer circular routes, followed by out and back routes and lapped routes the least. However, as a first timer at a half marathon, the lapped course gave me two main benefits: the first being that it made it a lot easier to pace and the second that I got to see, wave at and call out encouragement to lots of the other runners I know on the way round (some slower, some quicker than me) at various points.

No-one, however, mentioned anything about an obstacle race….

The first surprise was not long after we set off, as the course dog-legs left onto the lower promenade, and we were presented with knee-high seafoam. The runners in front of me were temporarily nonplussed by the sight of an Ibiza style foam party in our path, with some even stopping in their tracks. Being a trail runner, a little bit of foam (even if it did smell a bit manky) was not going to put me off, so I dodged around the stragglers and carried on my way.

The second surprise, however, was the shingle (blooming great pebbles) which had washed onto the promenade from the beach, as it was high tide time and stormy seas. In places this was probably 4 inches deep and it was the entire width of the prom, leaving only two choices: run on it or walk on it (you may think there was a third choice, but I never give up, so it wasn’t even an option). There were a couple of stretches like this and, being a lapped course, the promise of having to run across it not only on the way out and back, but also do it all again twice more. Oh joy! 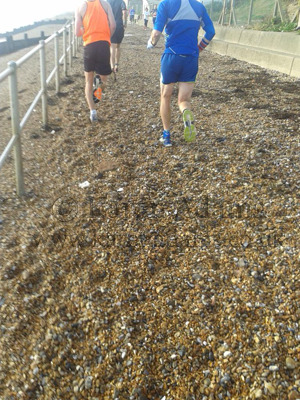 Some of the shingle on the promenade – picture taken by @Judie_Judie


I opted for running across it – not easy, I can tell you – as did many of the runners, some with more success than others. The shingle was deep enough in places that the stones shifted underfoot and it felt like I was making as much progress as I would running the wrong way along one of those airport moving walkways.

It was just after the turnaround point of my first lap, coming back across the stones, that I was grateful for my electronic tag-come-timing chip. A stray stone kicked by another runner flew across the promenade and struck me on the ankle, but fortunately for me it was deflected by the timing chip, resulting in no more harm than a quick yelp of surprise.

I completed my first lap within the time I had calculated in my head, so knew my GPS watch wasn't lying to me about my pace, and I still felt fresh and strong.

The second lap was fairly uneventful for me, other than a repeat of the sea spray/seafoam/pebbles and nearly running into an inanimate object (bollard) whilst daydreaming about my sub-2 hour target being within reach after all.

I spent the downhill stretch being amused by two ladies running behind me having a conversation about whether this was the final lap, or whether it was a 3 lap course. Finally, and after much debate, they asked another runner, who confirmed that, assuming they were on their 2nd lap, yes, they still had one to go! Surely they didn’t think they could run a half marathon in under 1 hour 20 minutes… or did they?!

I waved at a few runners, saw a spectator I recognised and shouted ‘hello’, was shouted encouragement with the words “well done Eastbourne parkrunner” by a marshal, who must be either a) a fellow Eastbourne parkrun regular, or b) a stalker, and had my photo taken by Tess - @Fit_bits from Twitter – who had finished the quarter marathon and was now spectating the half. 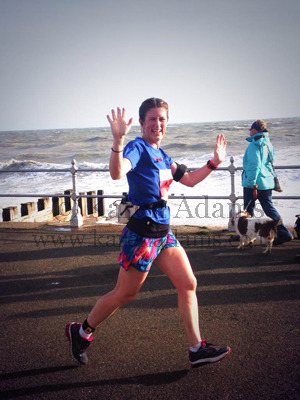 A smiley me starting lap 3 – picture courtesy of @FitBits_


The third lap was tougher, with a niggling tightness in my hip/groin area meaning I had to work harder to keep up the pace. The pebbles, initially a novelty on the first lap and just an inconvenience on the second, were now much more difficult to navigate on tired legs and without missing my footing. But my target was within reach. I had kept my head, stayed with the plan, paced myself well and this was no time to give in to slight niggles. So I pushed on, despite the wind reaching its peak of 27 mph (and virtually running on the spot at one small section where it became a headwind).

The marshal shouted his “Eastbourne pakrunner” encouragement at me again on my way past, I high fived a young lad waiting patiently with his hand out for a runner to pass by, attempted a sprint far too soon… 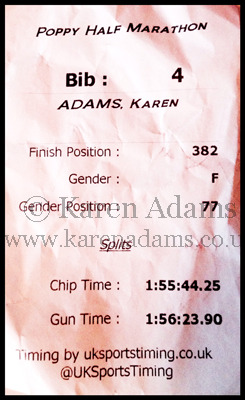 My timing slip – so pleased!


Still on a high, I collected my medal, tea and cake and caught up with @digdeepdolly just collecting hers. We had time for a selfie taken by the lovely @Judie_Judie before she had to rush off and catch her lift home. 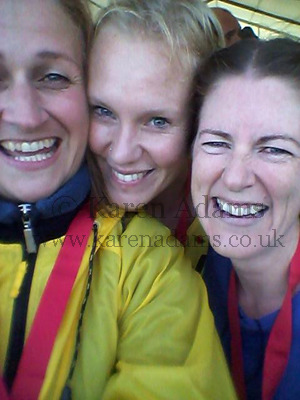 
Perhaps the biggest surprise of the day was that my braids stayed in and my hair looked like this at the end! 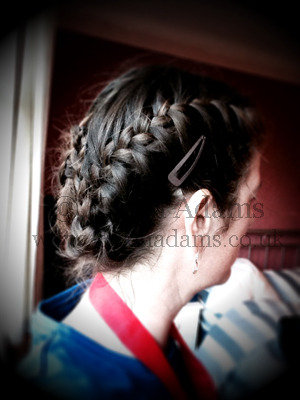 All in all, a fun day, nice people and a great event with a fab medal. I would definitely run the Poppy Half again – just think what time I could do on that nice, mostly flat course without high winds and pebbles to contend with! 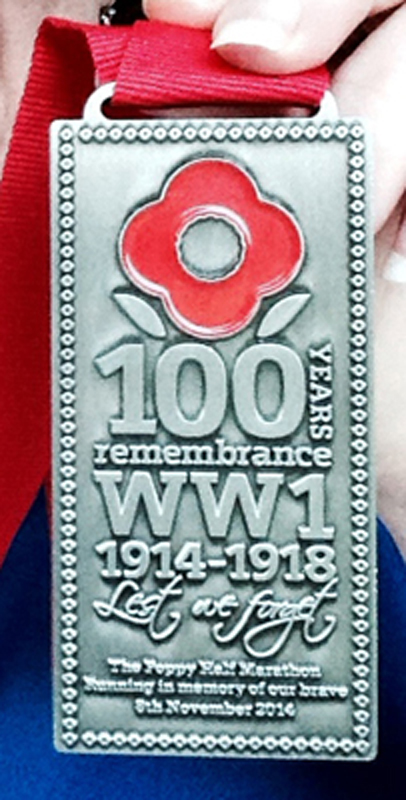