Blog: Running Through My Mind
After a few months of road running in preparation for my recent half marathon debut, I managed to get back out on the trails recently and remembered how much I love trail running. It reminded me of this blog I wrote back in August, but never got around to publishing it....
Previous
Next

17/11/2014
After a few months of road running in preparation for my recent half marathon debut, I managed to get back out on the trails recently and remembered how much I love trail running. It reminded me of this blog I wrote back in August, but never got around to publishing it....

Many of you will know that I love trail running. Some of you may even know that I adore it.

People often ask me why I love it, what exactly is it that I like?

Non-trail runners often talk about being apprehensive about it for various reasons, ranging from fear of turning an ankle on uneven ground, to getting lost, to being away from busy roads and bright lights.

There are many reasons why I love trail running.

I love the fresh air, rather than inhaling car fumes when road running (this is supposed to be a healthy pursuit, after all).

I love the views and discovering new parts of the South Downs I would not normally reach, where the access is only on foot. I recently discovered Lullington Heath Nature Reserve, for example (I say discovered, but I am pretty sure I am not the first person to find it, as there were maps and an information board by the gate), which is stunningly beautiful and has great trails. 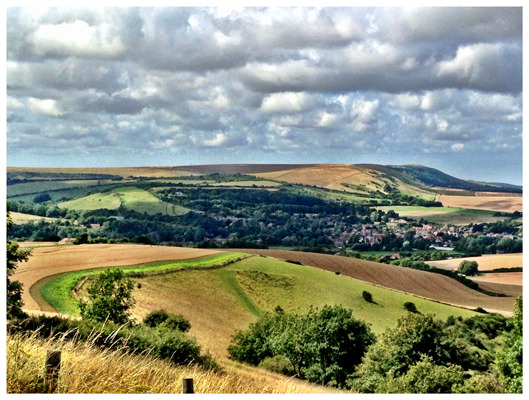 Then there are the health and training benefits. Trail running on the South Downs means you will be running up and down hills. A lot. This is great training for increasing speed and certainly gives my lungs a great workout! The uneven terrain and constant adjustments you have to make to allow for this are great for increasing ankle strength and general balance. The ground is a lot softer than running on roads too, so it is a little gentler on the joints.

The main reason, however, is probably that there is no such thing, in my experience so far, as a dull trail run.

Whether it’s getting caught out on top of a hill in a sudden thunderstorm, or sheep-dodging (that one makes an interesting wriggly line on your map if you use a GPS app!), or coming across birds of prey or butterflies in their natural habitat.

Take the other week, for example. I went for a run from my house up on the South Downs trails. It was an overcast day when I set out and perfect conditions for a long, slow run. Not far into the run, I discovered cows were in the field I needed to cross, huddled near the gate. Not a problem, I thought, I will simply scramble up the side of the hill, giving the grumpy looking cows (can cows look grumpy? I am not sure, but they certainly had an air of grumpy) a wide berth and re-join the track further up.

Great plan, until the thin trail up the side of the hill narrowed further and I found myself momentarily suspended with one leg over mid-air and the other about to follow suit! Fortunately, there was a handy tree on the side of the hill which halted my progress and on I went, only stopping to catch my breath and tweet about my mishap!

The next couple of kilometres were pretty uneventful, except for the multiple bings from my mobile phone as I received concerned tweets about my brush with death. Ok, maybe not death, but I bet it would have smarted a bit if I had fallen off the Downs.

Then I met with this: 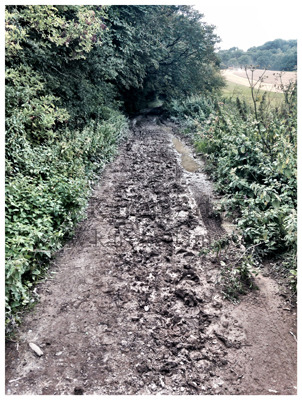 A quick consideration of my options, and another tweet about ‘goodbye clean trainers’ and I decided to pick my way through as best I could. I do hope the farmer harvesting the field next to the track wasn’t watching as, from that distance, I probably looked like I was performing a cross between a steeplechase and the Riverdance, hopping from one dry-ish bit of ground to another and leaping puddles as I went.

I then navigated a steep, rutted hill, narrowly dodging being mowed down by a couple of mountain bikers, who I can only assume where either on a mission to reach the bottom as quickly as possible, or to test out the efficacy of their cycle helmets if they hit one of those ruts at the wrong angle. I passed on the favour a short while later when, careering back down the other side of the hill on a slightly less rutted track, I failed to start slowing down early enough and nearly mowed down two hapless hikers making steady and sensible progress down the hill. Fortunately, they heard me thundering down behind them, frantically trying to stop my uncontrolled descent, and stepped to one side.

You would think that was more than enough excitement for one day, but no. I then got lost. I was trying out a new loop on an existing route, you see. Turns out, that loop took me off the public access on the Downs, through a field with some angry looking cows (if the others were grumpy-looking, no reason why these can’t have been angry-looking) followed by a locked gate, which resulted in me climbing another hill to go round them, only to then realise my error and have to double back again.

This, of course, resulted in my run being a little bit further than originally anticipated, turning it into a half marathon, in fact. 3km from home I had to navigate back down the hill that nearly killed me earlier (melodramatic? Moi?) to avoid the (still grumpy) cows huddled by the gate. Fortunately for me, I made it to the bottom safely, mere minutes before the heavens opened and the rain came down like stair rods. I literally couldn’t see more than a few feet in front of me, my shorts turned into something similar to shrink wrap and the rain poured off the peak of my sun visor in steady streams. The final 5km of my run, I discovered later, were also the fastest. By a long chalk.

So you see? Never a dull moment!
Next
Previous