Blog: Running Through My Mind
After almost nine months of denial, shit has just got real.

In 90 days I will be running a marathon.
Previous
Next

RunBrighton Marathon Training Seminar – This Sh*t is Getting Real

In 90 days I will be running a marathon.

Those of you who have been reading my blog will already know this. For those that don’t, scroll back through my posts to April 2014 and you will see how, somehow, through a combination of peer pressure, euphoria at completing my first ever 10k race (my first ever race. Full stop.), and sheer bravado, I got myself into this predicament.

Fast forward to November 2014 and you will understand that, although starting to face the reality and about to embark on the Marathon Attack Plan, I was still clinging onto the fantasy that it was all a long way into the future….

Last week, I received an email from Brighton Marathon inviting me to attend the RunBrighton Training seminar led by the official coach for Brighton Marathon, Nick Anderson. The seminar included a 90 minute group training run and, feeling smug that it was entitled “Let’s Get Started” and I actually started my Marathon Attack Plan (let’s call it ‘MAP’ for short) at the beginning of December, I thought, “why not?”.

So on Sunday morning I dragged myself out of my pit at 7am, bleary eyed and grumbling about, “who’s bloody stupid idea was this anyway, I could be having a lie in”, or something to that effect, and made my way over to Brighton.

Glossing over the fact that when, still bleary eyed and grumbling, I managed to add 6 miles to my journey by driving straight on over the roundabout up the dual carriageway instead of turning left (and not mentioning the fact that I drive halfway to Brighton every morning on my way to work, so have no excuse for going the wrong way), I arrived in Brighton in time for registration in nervous anticipation of all the things I was about to learn I have been doing completely wrong for the last 6 weeks.

As is usually the case, the runners were all a friendly bunch and I was soon chatting to other people there, finding out who were the first timers and who had run a marathon before, blown up big style for whatever reason and therefore felt they needed some guidance this time. I didn’t come across any seasoned marathoners, perhaps because they didn’t feel they needed advice and so hadn’t come, or maybe just because I have a talent for picking out the lost-looking newbies like myself. I also saw some familiar faces from the @UKRunchat community and stopped to chat, which is always nice.

The morning was structured as a bit of talking, a group run and then a bit more talking, with opportunities to ask questions throughout and access to advice from a physio and from Saucony representatives and RunBrighton Ambassadors.

The run itself was good fun. We had a group warm-up then chose our intended marathon time – after some dithering, I went for the sub 4:15 group - and set off with our RunBrighton Ambassadors whose job it was to a) keep us under control in a group and b) keep us running at a pace approximately 1 minute per mile slower than marathon race pace for 90 minutes. This was not a task for the faint-hearted, with a bunch over-excited runners to look after and our ambassador made full use of his lungs, reminding us to, “slow down”, and “get back here”, when we made a bit of a break for it!

Ordinarily, my running consists of threshold road-runs during the week (usually in the dark and always on my own), slow trail runs (usually including 200-300 metre almost vertical climbs to get to the top of the South Downs from my house and, again, on my own) and Saturday morning parkruns with 100-200 others, but at a flat-out pace with a sprint finish if I can muster one up.

Running with others, at a slow pace, having conversations as I ran, was therefore a real novelty for me and something I would like to repeat as part of the MAP. If I lived closer to Brighton, I would definitely have enjoyed signing up for the weekly Sunday runs.

The session immediately following the run was a cool down and stretch led by Dawn Buoy, the official physio for Brighton Marathon from @bodyrehab. I do a little yoga when I can, and do stretch before and after a run, but I failed miserably with her, “which muscle is this stretching?” pop quiz.

However, I think I made up for my lack of knowledge of muscle groups (according to my sports masseuse, I just have one, great big, stuck-together muscle anyway) with my ability to reach my toes and get into “pigeon pose” with some measure of decorum.

Note: if you want an ice breaker, trying to get into pigeon pose whilst positioned between two good looking, athletic men who are struggling to do the same and finding it quite amusing seems to work quite well! On the downside, it is not easy to hold conversations with two good looking, athletic males, one on either side of you, whilst your right foot is somewhere under your pelvis and your left leg is extended behind you. (Maybe I just need more practice...)

I found the seminar very useful and would recommend it to any first, or second, timers. Nick Anderson @nickandersonrun is an engaging speaker with lots of practical advice and Nick Morgan from @AWONutrition put forward simple, easy to follow guidelines to make eating right a doddle. Other speakers gave a useful insight into marathon running in general and running Brighton Marathon specifically and I found myself feeling awed and excited in equal measure.

I was relieved to find that, not only was I not doing it all wrong, I am, in fact, doing quite of lot of things right. I had been feeling happy with how my MAP was going, with just one missed run so far, but it was good to hear that, not only am I sticking to the Plan, but that the Plan appears to be ticking all the right boxes.

There is, of course, always room for improvement and I picked up a few hints and tips which will be incorporated into the MAP.

I AM running a marathon….the MAP leads to Brighton…. and I can’t wait. 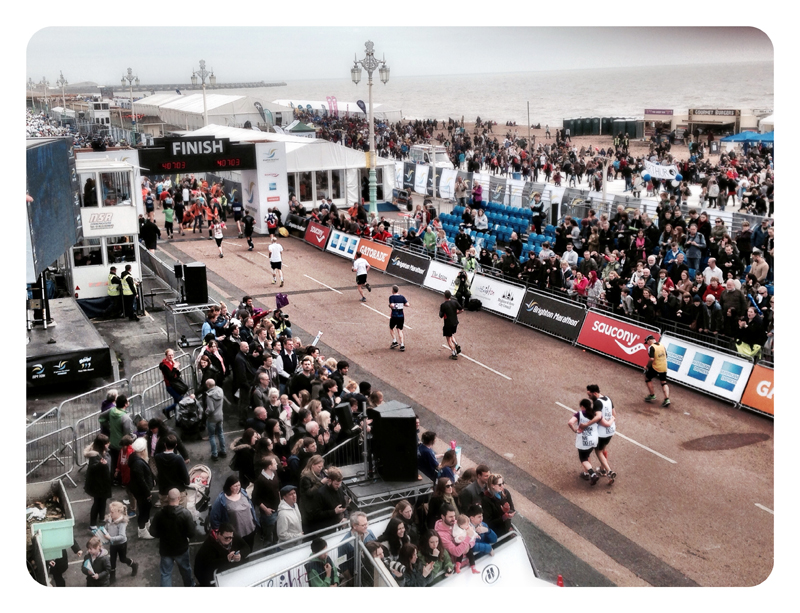