Blog: Running Through My Mind
Today I ran Eastbourne Half Marathon and it was great. Really great.
Previous
Next

I set off too fast, the cardinal sin of racing, and suffered for it a bit at the hill at Beachy Head Road, between miles 2 and 3.

I fuelled as normal, with porridge first thing and a banana on route to the race, but felt a bit lacking in energy, even after a gel at mile 4. (I suspect this could be because I actually got up and made breakfast as planned, instead of my usual pre-race prep, which involves aiming to make breakfast at a certain time, pressing snooze too often and then making it half an hour later than planned!)

As a result of this lack of energy, I ate some of the jelly babies offered on course by the marshals, which I don't normally have, and felt a little bit nauseous for a while.

I chose the wrong clothes and was far too hot for most of the race - thank goodness for the water stations serving water in cups. I didn't actually drink any of it, just poured it over my head.

I was way too thirsty all the way round (perhaps I should have drunk more of the water on offer, but I relied on what I was carrying with me), presumably because I was over-heating.

My trainers are a bit too small in the toe box, so at mile 6 I had to stop and remove my shoe as I had a sharp pain. I couldn't see or do anything about it, however, as I was wearing knee high compression socks under my running tights. That didn't prevent me from stopping twice more to remove my shoe during the race, as it felt like I needed to try and move my toes around to ease the pain - as it turns out, I hadn't lost a toenail, as I suspected, but I did have the mother of all blisters (a hole actually) on the middle toe.

The wind blowing against me on the final stretch of the seafront was so strong it slowed me to a walk.

I was aiming for a 2 hour marathon pace, but all the above resulted in an official time of 2 hours 11 minutes, some 15 minutes slower than my last (and first ever) half marathon – which was run in gale force winds over shingle!

So, why was Eastbourne Half Marathon great?

It's simple really; apart from being a well organised event with a fab medal, great marshals and with lots of support, it was a training run for Brighton Marathon and a chance to found out what not to do and I would say I definitely learnt a few things! It was also, and perhaps even more importantly, the first run I have done without any pain from my left leg since I threw my fibula out on 31 January during a training run.

So you see, no run is ever a failure, you just need to look at it from a different perspective. The one thing I worried most about, namely the problem with my fibula rearing its ugly head or, worse still, making me a DNF, didn't happen, and for that reason I am over the moon. 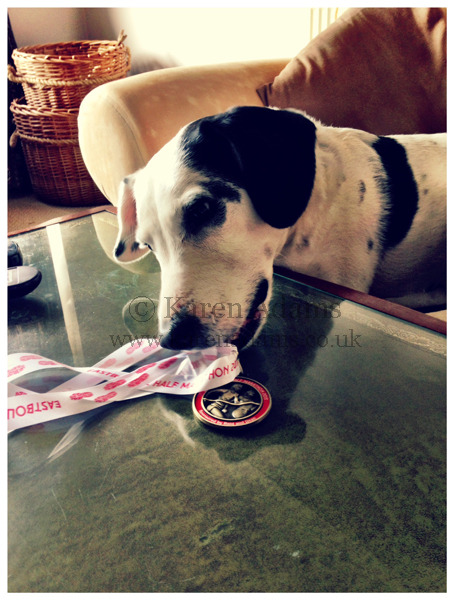 Wilson testing my medal to see if it is real gold ... 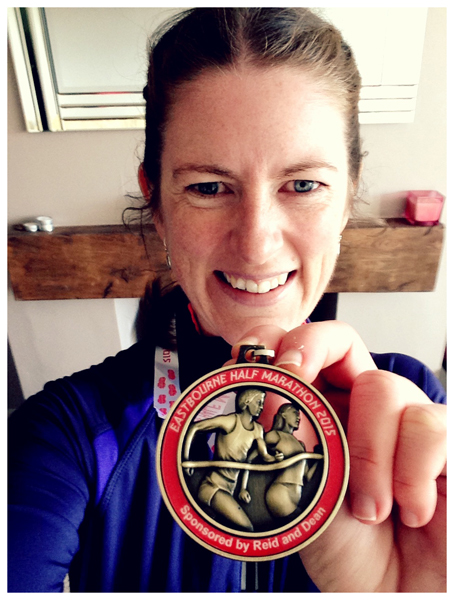