Blog: Running Through My Mind
A tale of woe - don’t read if you are squeamish!
Previous
Next

My fitness levels had never been better and I was feeling great. I signed up to my first ever track training sessions and was smashing out 200m and 400m PB’s week after week.

Then December arrived, and with it the Christmas party and lurgy season....

I simultaneously started to redecorate my house and caught a horrendous bug, which hit my chest and made it impossible to breath whenever I exerted myself more than just getting up off the sofa. So after the first week of December I didn’t run again until January. In the meantime, I decided to have all 3 bedrooms, hallway and lounge replastered and order carpets, so January and part of February didn’t allow much time for running between ripping off wallpaper and then sanding and painting the replastered walls.

Finally, March arrived, we had broken the back of the decorating and I was able to get back to running again. Everything was getting back on track, the carpets were booked to be fitted on 25th March, the furniture was put into storage in anticipation of the carpets arriving and I was out on the trails again.

There was a flu-bug going around which reportedly had originated in china in late December called COVID19 (or Coronavirus), but no-one was too worried as we have seen this before with SARS, bird flu, HN15, etc. I am also convinced from the reported symptoms that this is what I had in early December and the Chinese have lied about when it broke out to cover up their original attempted cover-up.

Fast forward to 23 March and the whole world is now going into lockdown, the UK included. Well, partial lockdown, but that didn’t prevent Carpetright from cancelling my carpet fitting.

So here we are, in partial lockdown, very little furniture, no carpets and no idea when they will arrive and me working from home. On the plus side, my running is going better than ever - particularly as my commute time is now 30 seconds from the front bedroom makeshift office to the lounge and that gives me time for a longer run before dinner.

Apart from horror at the financial ruin being caused to our country (and most of the world) by the effects of the lockdown for a 0.2% death rate, currently far fewer than the 50,000 normal winter flu deaths last year, things were going pretty well ..... then on an ill-fated mountain bike ride, I snapped my right achilles’ tendon.

Unfortunately, it’s not even a good story as to how I did it. I didn’t crash into a tree, I wasn’t hurtling down one of the Seven Sisters or Beachy Head at breakneck speed (although I been doing that, just not at the time I injured myself). No, I simply put my foot down wrong when I stopped because I was on the slope of a hill and it was just a bit too far to tip the bike and .... well, you get the idea.

I knew straight away that I had done something serious. We were 6.6 miles from home, on the Seven Sisters near Belle Tout Lighthouse on the South Downs Way. I walked my bike back up the hill once the initial pain had passed and it became immediately obvious that I had ‘done something’ to my achilles, which had no ‘push’ and I could only walk in a painful, flat-footed way and my calf muscle was incredibly tender just below the back of my knee.

My fiancé had to leave me near the road and cycle home to drive back in his van to collect me.

Once home, I elevated and iced my ankle, but there was no improvement, it was very painful and I was still unable to walk. When I realised that the tendon at the back of my heel no longer seemed to be there (a comparison between ankles revealed the rather alarming fact that there was a gap)

A trip to A&E resulted in me being given an x-ray and a temporary walking boot with a general agreement that it looked like my tendon ‘wasn’t quite right’, but I would need an MRI on Monday to confirm.

Saturday night and Sunday were very painful, with my right foot swelling up and I was unable to wear or walk in the boot, particularly as I wasn’t given any crutches. There was no pain from the heel area and I believe the pain was a normal sprain, which was aggravated by the boot being so tight. I was relieved on Monday morning when I woke up and all the swelling had gone down and there was no more pain (except when I walked in the boot, but nowhere near as bad as the day before). 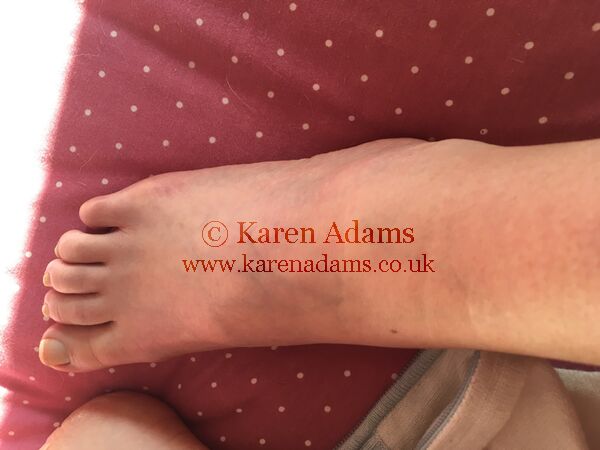 Monday arrived and I had the MRI and was immediately referred to the consultant, who confirmed that I have ruptured my Achilles’ tendon, with a 0.6cm gap 4cm above the heel insertion point. I was fitted with a bigger, better boot (and crutches - hoorah!) and told I would be wearing this for 8 weeks while my tendon heals. My toes are pointed down in the boot, but I have instructions to lower the heel by 25% every 2 weeks until I am walking flat by week 8, with a telephone consultation after 4 weeks to see how things are going. I also have the pleasure of giving myself a daily injection of blood thinners to lower the risk of a clot (deep vein thrombosis). Lovely.

So, no running (or cycling) for me for the foreseeable future and a long road to recovery awaits ...

How plan’s change in a short period of time, eh? 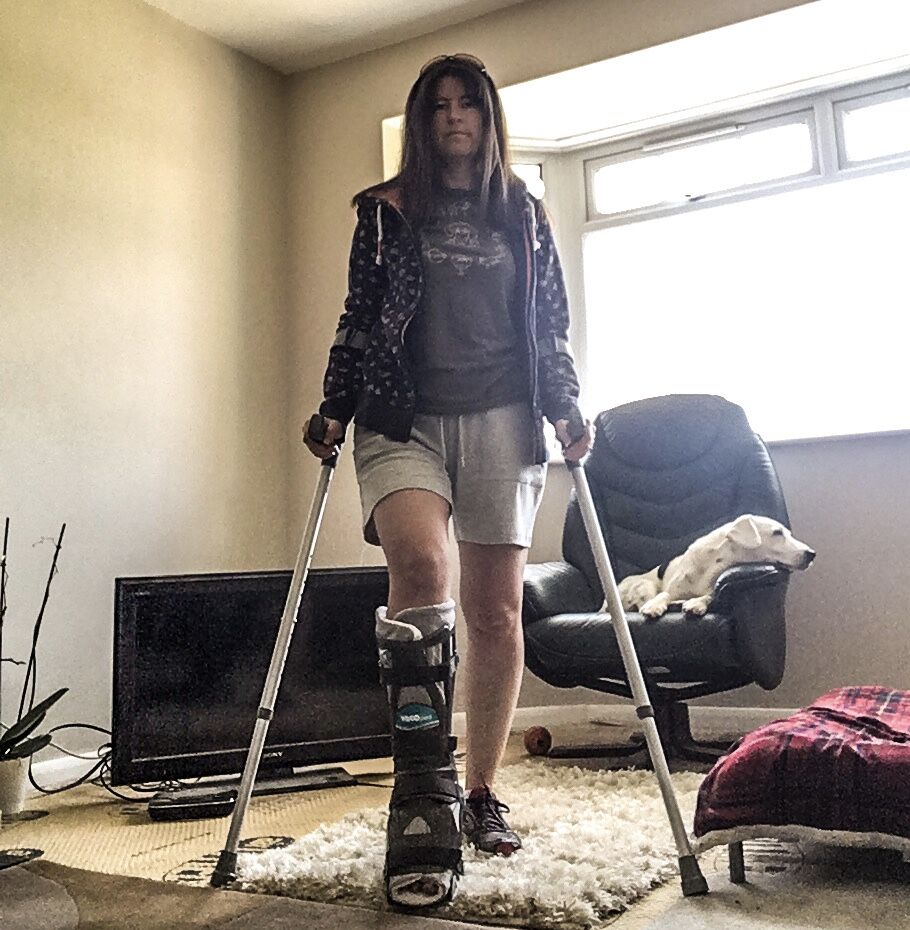