Blog: Running Through My Mind
The toughest trail marathon in the UK?
Previous
Next

It has been a while since I last wrote about my running ... almost 4 years in fact.

That’s not because I haven’t been running, far from it. Since my last post, I have run London Marathon, a few 15 mile trail races, multiple half marathons and many other shorter race distances. I have also spent countless happy hours running on my beloved South Downs Way, just me and my hydration vest (and maybe a snack or two). However, for three of the last four years, I was also working in a job that demanded long hours and weekend working, so something had to give and that something was my blog.

After three years of shoe-horning my running into a very small window of time (and sacrificing a lot of the training I would have liked to have done), I changed jobs just over a year ago and now my work hours are much more civilised. I love that I am now able to dedicate some time to my running again and am able to train properly for events.

My most recent achievement was the Eastbourne Beachy Head Trail Marathon in October, my third marathon and first trail marathon.

The marathon falls on, or very close, to my birthday each year and I had originally planned to run it for my 40th birthday. A bit of an extreme way to avoid any obligation to have a party or, worse still, a surprise party, but I am not going to lie to you; that was definitely part of the attraction! As it turned out, however, I got a bigger surprise - acceptance into the London Marathon ballot on just my second try.

I didn’t feel that with my long hours at work, I could dedicate myself to two marathons in quick succession in the autumn and then the spring. As getting into London Marathon via the ballot is so difficult, I decided to concentrate on that one and postpone Beachy Head Marathon. Little did I know that my working hours would take such a toll on me and it would take me three years to get around to entering Beachy Head....

Fast forward to Spring 2019 and a friend of mine, who is new to running has definitely been bitten by the bug, asked me whether I have ever thought of doing Beachy Head Marathon because its, and I quote ‘your neck of the woods’ and ‘your type of running’. The seed was planted, germinated, grew and next thing I knew, I had signed up and was embarking on the training plan.

I have trained for two marathons before, so had an idea of what to do, but both of those were road marathons and not particularly hilly, the first of which went well and the second not so much.

I started training at the end of July, from a reasonable base of fitness. The weather was amazing until September, at which point the rain and gale force winds arrived and just didn’t go away again! I was just really hoping the weather would improve before the main event.

This time around, the training went really well. My pace wasn’t quite what I was hoping for (but then I was probably hoping for a miracle), but my fitness and stamina were coming along really well and, apart from a few minor niggles, there were no injuries or setbacks. My longest run was 18 miles and I felt that I was strong enough to make the extra 8.2 without an issue - particularly as my previous 16 mile run had been in gale force headwinds so strong I couldn’t stand up at times! My plan was to aim for 6 hours or less if the conditions were good on the day.

The 26th October 2020 came around quickly and, after some horrendously bad weather on previous weekends, the forecast was slightly improved; sunshine and cloud, possible rain by 3pm and moderate winds with high gusts. The forecast turned out surprisingly accurate (for a change) and I lined up on a sunny start line in nervous anticipation with the friend who had so flippantly suggested I sign up earlier in the year.

We set off together up the very steep hill at the start (some people climbed up on their hands and knees!) and were together for approximately the first mile. However, being local, I opted for the left hand fork when there was a choice and my friend went to the right with some of the other Hastings runners she came with and we didn’t rejoin after. 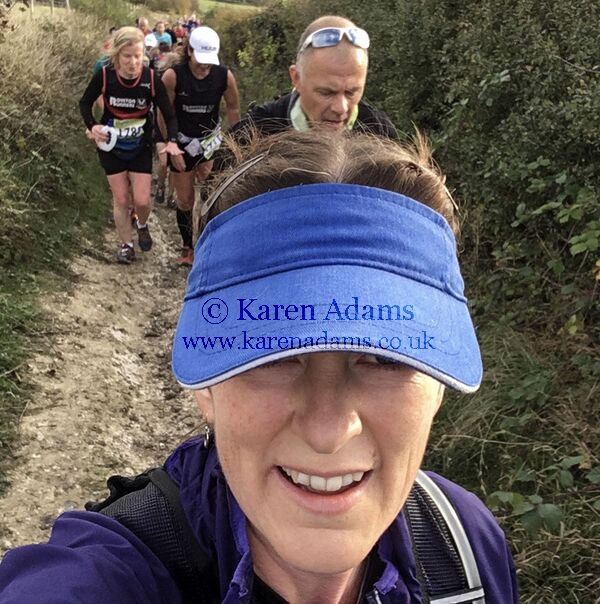 One of the (many) hills en route

There was epic mud, stiles and gates, the ‘stairway to hell’ (over 300 stairs on the route in total), route diversions due to flooding and 40mph gusts of wind (mostly headwind). I walked up the big hills, the very muddy bits and the congested bits. It took a long time queuing up to cross the bridge at Alfriston - enough time to have two conversations with different couples and eat some banana cake and twiglets - and I stopped at the Littlington checkpoint for a cup of tea (heaven) and to have a little jig to the live band playing there, before heading off up another hill to the sound of ‘hit the road Jack’ being performed by the band. 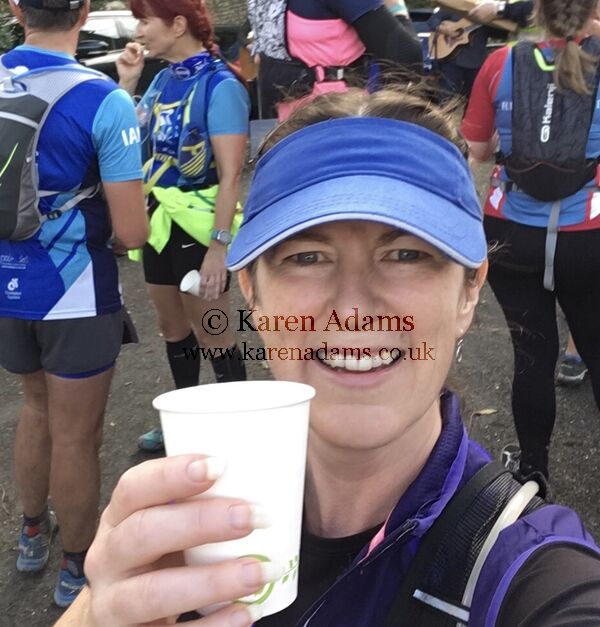 A cup of tea at Littlington checkpoint

A colleague from work who hadn’t signed up for the marathon ran to the top of Bo Peep hill and waited for me so he could run approximately a mile of the marathon route with me, which was really nice. He said afterward that he couldn’t believe how draining the headwind must have been, as it was bad on just that short stretch.

At around mile 15 I received a text from my fiancé asking whether I had finished yet (he was joking, of course). I was feeling really strong at this point. However, by mile 18, running down a large hill, after climbing the other side of the large hill into a headwind, I got the warning signs of a calf cramp, so I had to slow down to a walk. For the next few miles, I walked a lot, ran a bit, until the feeling of getting cramp finally passed.

At the top of Birling Gap, I was getting a bit colder because I was run-walking, so decided to put the sleeves back on my jacket (which I was wearing as a gilet) and it was so gusty I had to hang on for dear life. Imagine Mary Poppins, but replace the nanny with a sweaty runner and the umbrella with the sleeves of a jacket!

At this point I revised my goal from finishing in 6 hours to beating the rain, which looked like it wasn’t too far away.

Running up one of the final hills, one of the Seven Sisters, a group of people caught up with me. One older gentleman, wearing a white tutu, said, ‘it’s not a skirt, I’m a bridesmaid’ and I realised I was running with the couple who got married at Alfriston during the marathon and their family. The ‘bridesmaid’ was the father of the bride (I think) and he said the whole family are into running, having finished an ultra-marathon just 2 week’s earlier. Running and chatting with him made the final hill go all the quicker and then I reached the Beachy Head Pub and realised it was all flat and downhill from this point forward. My last mile was the quickest mile of the whole marathon.

26.1 miles ran, nearly 4,000 feet climbed and 6 hours 13 minutes later and I had finished perhaps the toughest trail marathon in the UK ... and I beat the rain by 10 minutes!

Strava actually recorded my time as 5 hours 53 minutes, probably because auto-pause took out all the queuing time at the stiles, gates, bridge and stopping at checkpoints or to put my coat sleeves on!

The scenery, event management, volunteer marshals, checkpoints and support were amazing and I am so proud to have done it.

Maybe I will have another stab at that sub-6 hour target in (hopefully) better conditions next year ..... 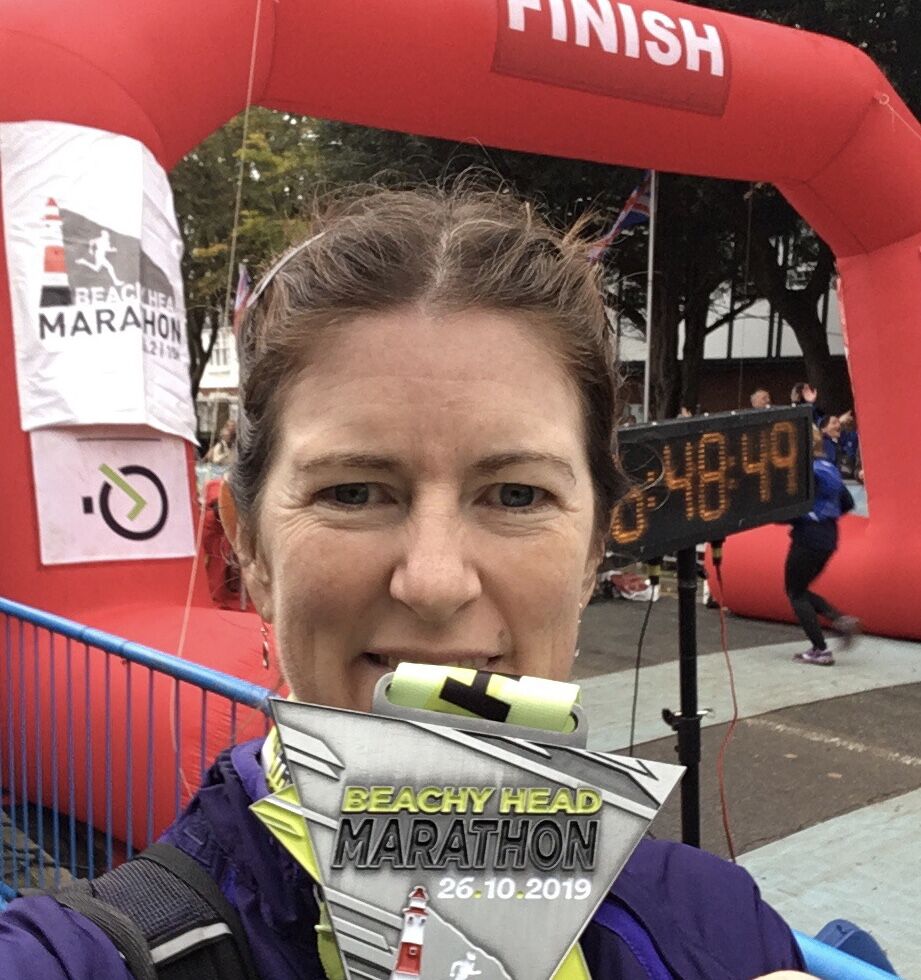